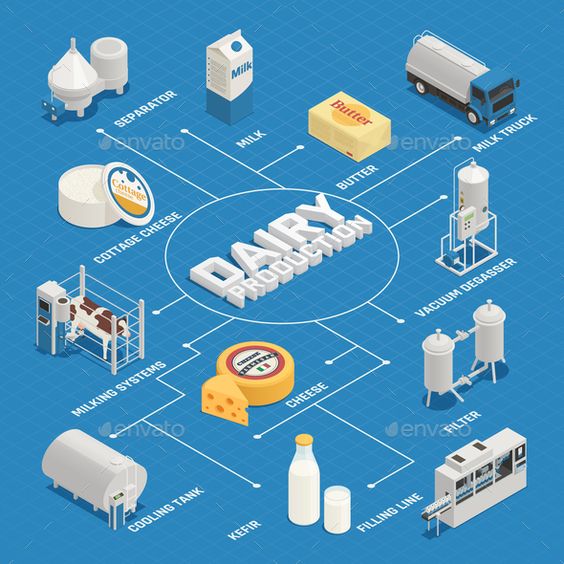 Ongoing cruelty in the dairy industry is widespread! If you are a lacto-vegetarian because you think that these animals are not killed for food and do not experience suffering to produce dairy. Think again! Not only does the dairy cow end up on the plates of your carnivorous friends, she also experiences tremendous amount of cruelty in the whole “production” cycle, making death a final horrific release from suffering. And the male cows are used for clothes, fertilizer, animal feed, and pet food, among other things. This is, of course, after their sperm has been used to produce more females. 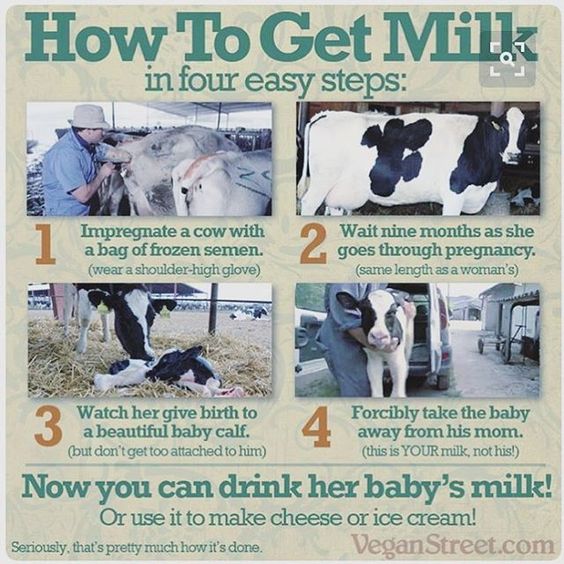 To keep the dairy animal’s milk flowing, she is artificially inseminated two to three months after giving birth. The result is a crushing double burden of pregnancy and lactation for seven months out of every 12. In truth, the dairy cow is the hardest worked of all farmed animals, nurturing a growing calf inside her while simultaneously producing 30-50 liters of milk a day. No other farmed animal carries this dual load of pregnancy and lactation. Professor John Webster has likened the workload of the high-yielding dairy cow to that of: “…a jogger who goes running for six to eight hours every day.” He believes that “the only humans who work harder than the dairy cow are cyclists in the Tour de France.” 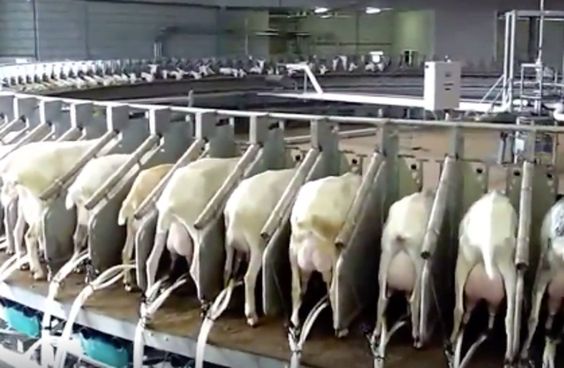 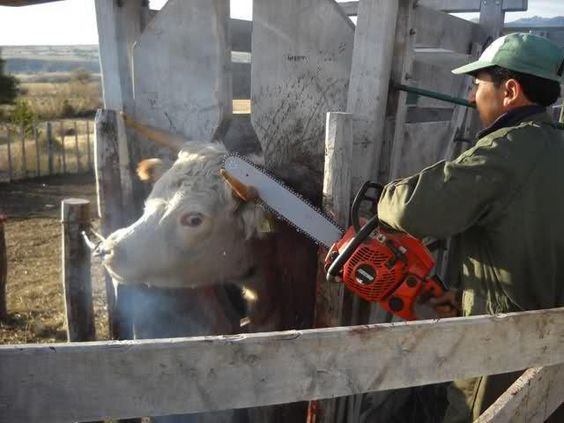 Today dairy cows are usually chained up in very confined limited spaces and are milked by machines. Reproduction happens through the process of artificial insemination. The cycle of cruelty begins at the time of the birth of the baby calf, for which the mother’s body is ready to nurse. These bonded animals both suffer greatly when the female baby calves are taken away after only three days. The mothers are then left to be suckled by automated machines. The male calves are taken away in the first few hours and enter the cruel death cycle of the veal industry. Before being slaughtered, the male calves are kept caged and immobilized without sunlight or nutrition for 6-weeks. It is commonly known that the mother cow knows that her calf is going to be taken away from her and harmed or killed, and the distress, which can last for days, causes toxins to be secreted into her milk. 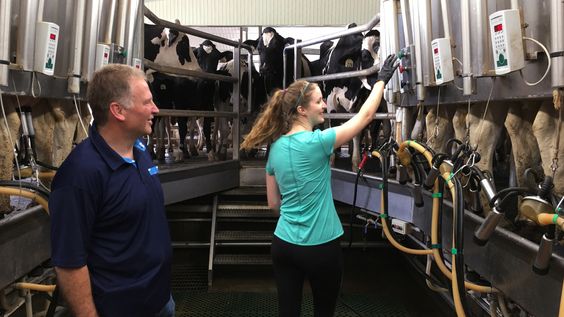 In previous historical times, the practice in India recognized that the milk belonged first to the calf. The mother cow fed her calf first and only after the calf had taken its fill was the leftover milk taken for human consumption. In this way, the abundance of milk was shared with the family who owned her. 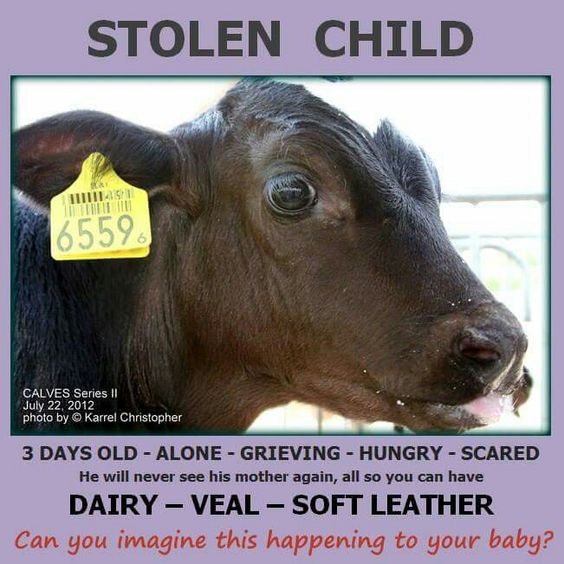 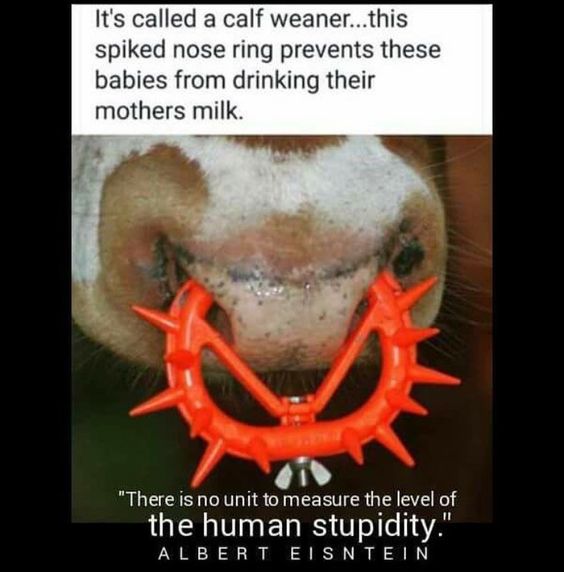 Cows today are genetically designed to produce up to 25 times more milk. Fifty years ago, the average cow created 2,000 lbs of milk per year. Now the top dairy producers give 50,000 lbs per year. 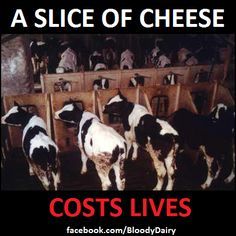 To produce such astounding production quotas the cow has become part of an elaborate industrial process. Milking machines have been used since the 1870’s. Today the cow is attached to these machines for hours on end. This overproduction is achieved by the use of Bovine Growth Hormone (BGH), other hormones, antibiotics, drugs, and force-feeding. The BGH creates a 50-70% increase in mastitis. The mastitis is treated with even more antibiotics. The cows are also fed with sheep and fish parts, made into a meal. It is unbelievable what goes on in the life of the cow! 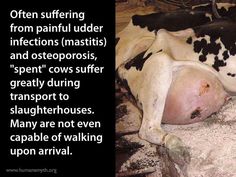 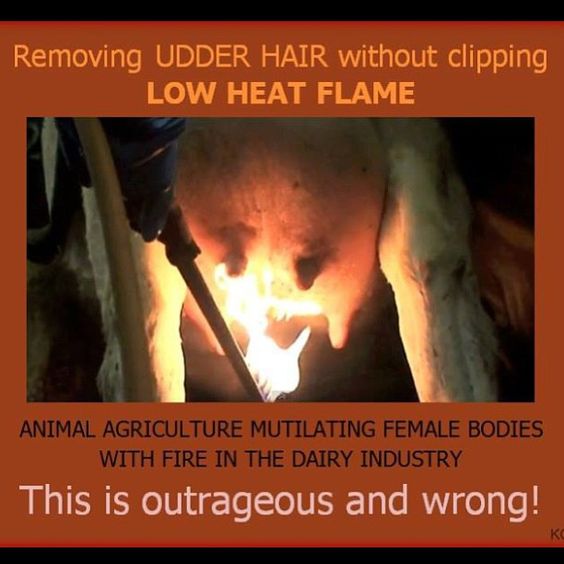 Before the industrial age we could say that cows lived a more natural lifestyle. Today their artificial lifestyle creates an array of diseases in both the animals and those that eat or use their products as we shall see later in this article. Now due to unnatural overproduction, what is actually happening to the cows being used for milk production? The normal average lifespan of a cow is about 18-35 years. This increased milking combined with being pregnant and lactating, milks away her life force. The average milk producing cow lives an average of 3 years, a factor of a 6-10 times shorter life. In human terms, we can say that, rather than living to a ripe old age of 80, one’s life would end before reaching puberty. Cruelty and exploitation take a toll! 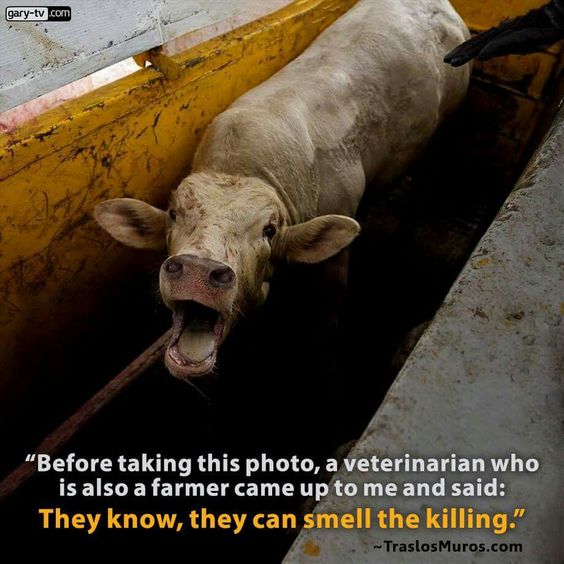 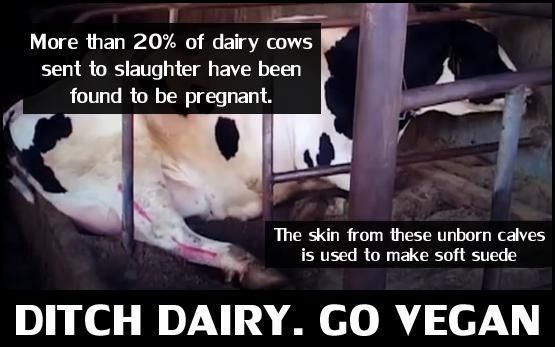 In this dairy system we also create a massive hoarding of resources. There is a tremendous loss in energy, materials, labor and caloric value. Better use of these resources could help solve the food crisis on the planet and prevent the death by starvation of 29,500 children per day (according to UN statistics) and approximately 40 million people who starve to death each year. There is a tremendous amount of energy and grain that is required to feed the cows. The food required to feed 100 cows could potentially feed 2,000 people. The cows in the world consume two times the calories as the world human population. In US the cows consume five times the amount of grain as humans.

Cattle farming, which includes our dairy cows, causes the loss of 85% of the topsoil each year. Not only this, the water used in the dairy industry (and its by-products) is EXTREMELY high. A vegan lifestyle can potentially save 1,500,000 gallons of water and 1 acre of trees each year! If we all became vegan there would be enough energy and food to feed the world human population seven times over. 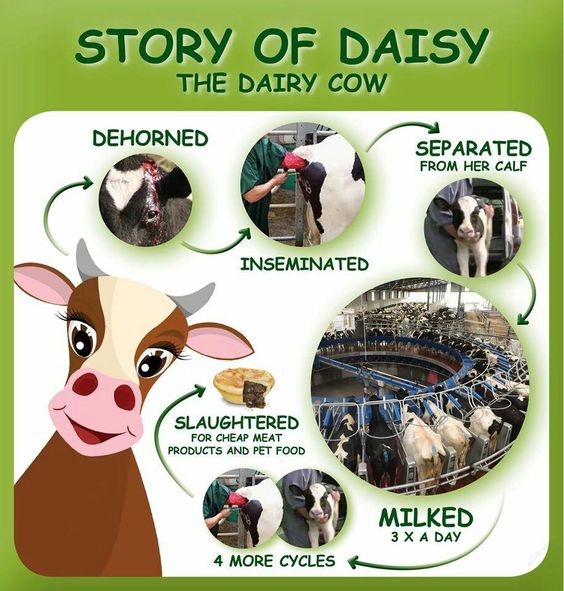 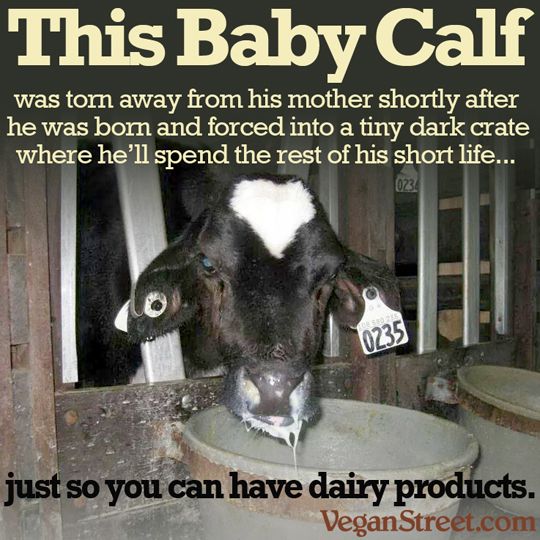 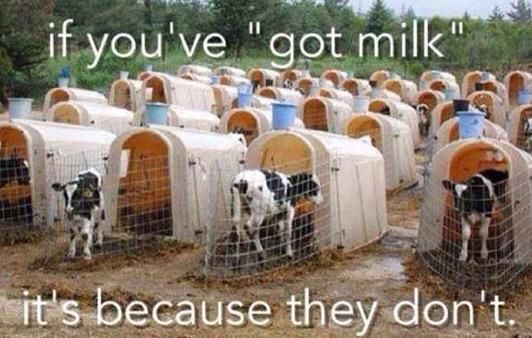 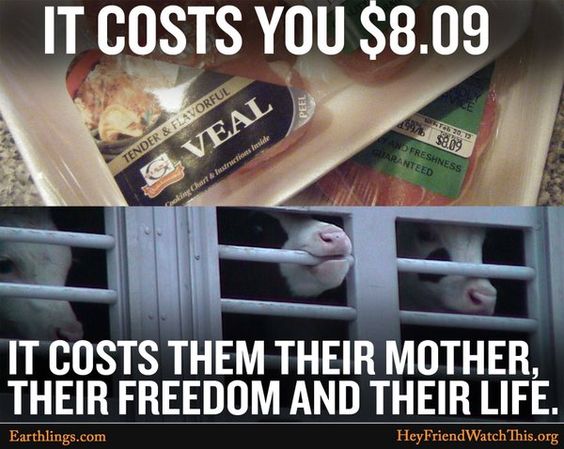 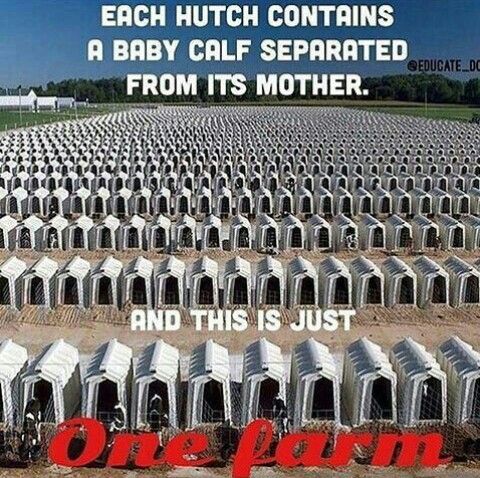 The result of all this cruelty and industrialization of live stock, especially of cows is that cows have become carriers of a significant disease. The 2004 edition of Friends of the Earth cites several autopsy studies in the United States that suggest between 3% and 13% of the people diagnosed with Alzheimer’s actually had “mad cow disease” or Creutzfeldt-Jacobs disease. The research in Friends of the Earth suggests that Creutzfeldt-Jacobs can be transmitted by a person consuming less than one gram of the diseased tissue from any part of the cow. It alsosuggests that there may be at least 120,000 cases of Creutzfeldt-Jacobs disease that are unreported in the United States. 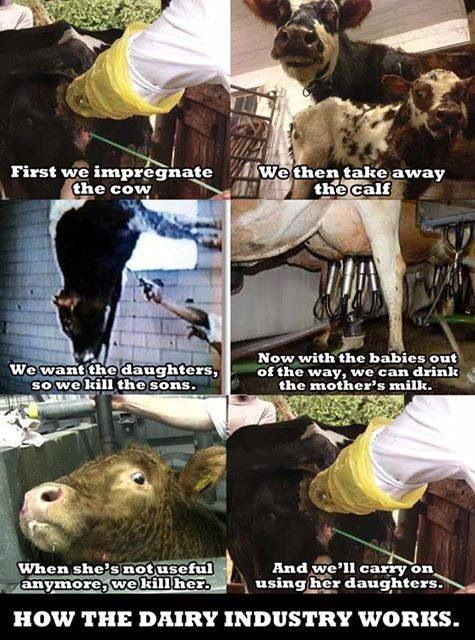 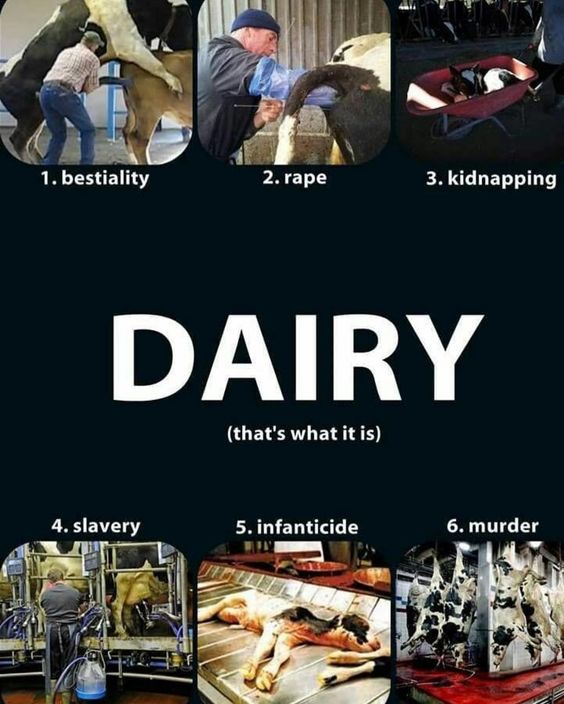 According to http://www.notmilk.com the average liter of milk in Florida has 633 million pus cells, which is the highest in the nation. Montana is the lowest, with 236 million pus cells per liter. This is not a healthy thing, whether it is 236 or 633 million. Besides pus cells and blood, which are now normal in milk produced during machine suckling, the milk is also high in pesticides, herbicides, antibiotics, hormones, radioactive iodine, and disease factors such as mad cow prion and bovine leukemia virus. In addition research cited by Robert Cohen of http://www.notmilk.com has made the point that there is up to a gallon of extra mucus in the body that is created as a result of drinking dairy. The mucus problem is associated with the fact that eighty percent of milk protein is casein, the main ingredient of Elmer’s glue. 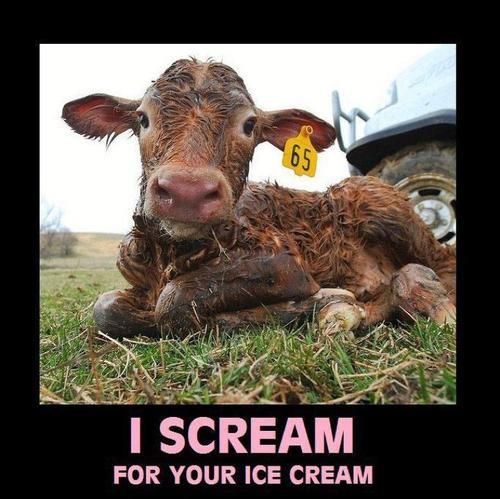 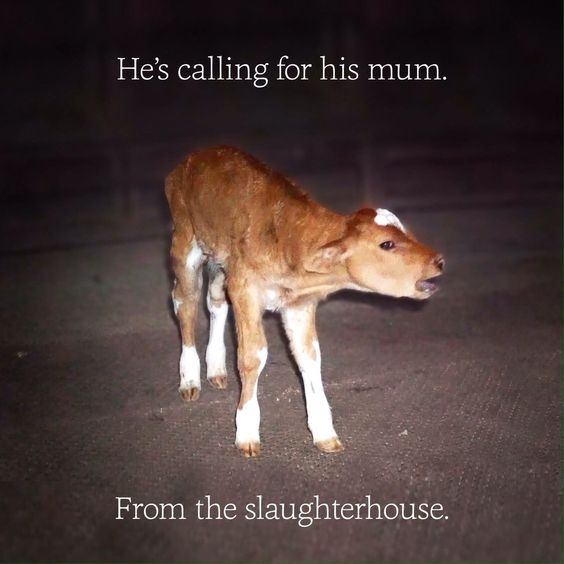 The other argument as to why it is not good for humans to have dairy, is that it is not our natural cycle. We do have the physiology as a baby to deal with dairy while we are breastfeeding. Our bodies then change and we really don’t need mother’s milk past the age of 3 to 5, or when we stop breastfeeding. Many stop producing lactase enzyme and thus become sensitive to milk. This is known as lactose intolerance. Lactose intolerance affects 50 million people and is associated with the gastrointestinal tract. The milk industry itself admits that lactose intolerance plays intestinal havoc with as many as 50,000,000 Americans. Up to 90% of blacks and 20%-40% of Caucasians are lactose intolerant, with variation in between, according to different race genetics.

The result of eating dairy when we no longer need it is that we tend to develop a multitude of gastrointestinal problems, allergies, congestion, and sinusitis. Some of the biggest problems are gastrointestinal and anemia because the reaction of the milk in our GI tract causes bleeding. Also, if you are drinking a lot of milk (three or more glasses a day) it is going to increase the rate of osteoporosis, according to the research, because of the high protein. 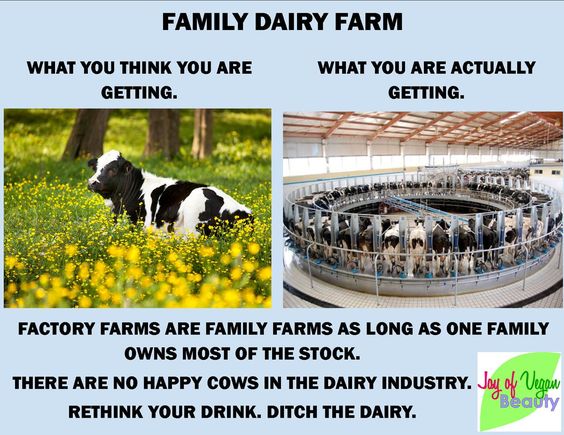 Cows milk is not a mother’s milk replacement!

Another aspect of not being aligned with the natural cycle is that human mother’s milk is designed for the nervous system of infants, and cow’s milk is more designed to grow a calf. Cow’s milk is 4 times higher in protein than human milk. It is designed for the massive skeletal and muscle growth which a 400 pound cow needs. Human milk has 6-10 times the essential fatty acids, especially the linoleic acid and DHA, which is needed for human brain development and overall nervous system development. One research showed breastfed children had 10 points higher IQ than children not given mother’s milk. 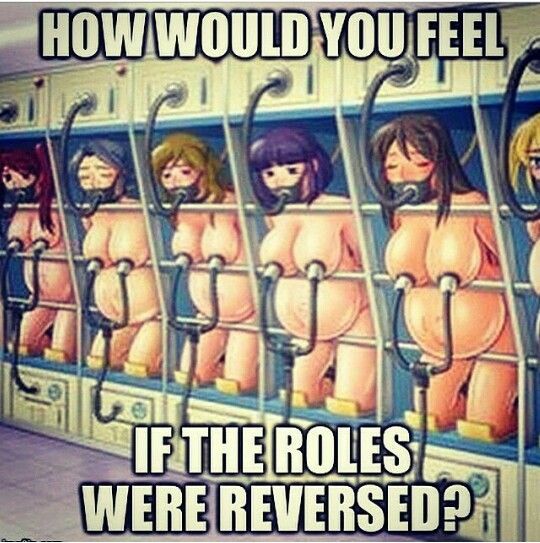 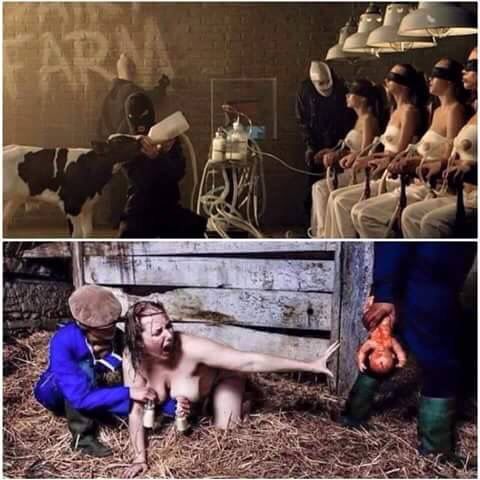 Everything that comes out of a lower center, feces or eggs, is considered profane (impious) according to Ayurveda. One who consumes anything from the lower centers defile himself. It is a big obstacle not only for spiritual growth but for taking righteous choices in everyday life as well.Milk seems to come from a low center too. Although the udder is situated in the lower part of cow’s body it’s her breasts and represents the heart center full of love and compassion.

The message from the research indicates that dairy may be a less than an appropriate food for this time. It does not mean if you drink milk that you won’t wake up spiritually. It does clog the nadis (subtle spiritual nervous system) and brings in the energy of death, misery and suffering into our spiritual bodies. At this time in history the choice to be vegan and not using dairy returns us to the original Garden of Eden Diet which is part of creating the pre-conditions for a massive upgrade of human consciousness.

By holding this vegan position, which is a form of giving joy by being conscious and socially responsible for what we consume, this is a message of the importance of addressing the milk question. 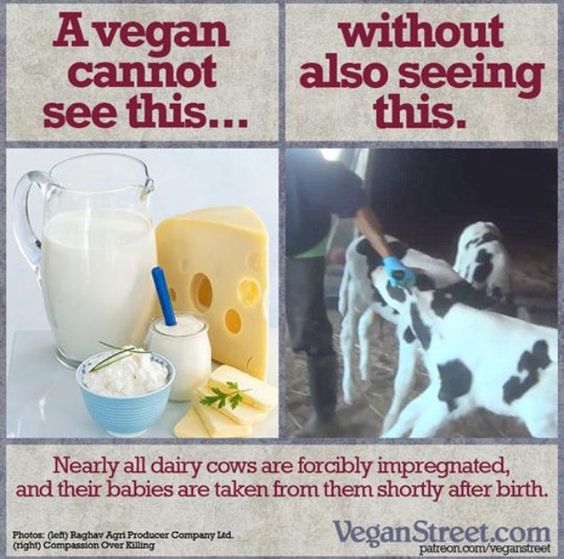 One thought on “The Dairy Industry”