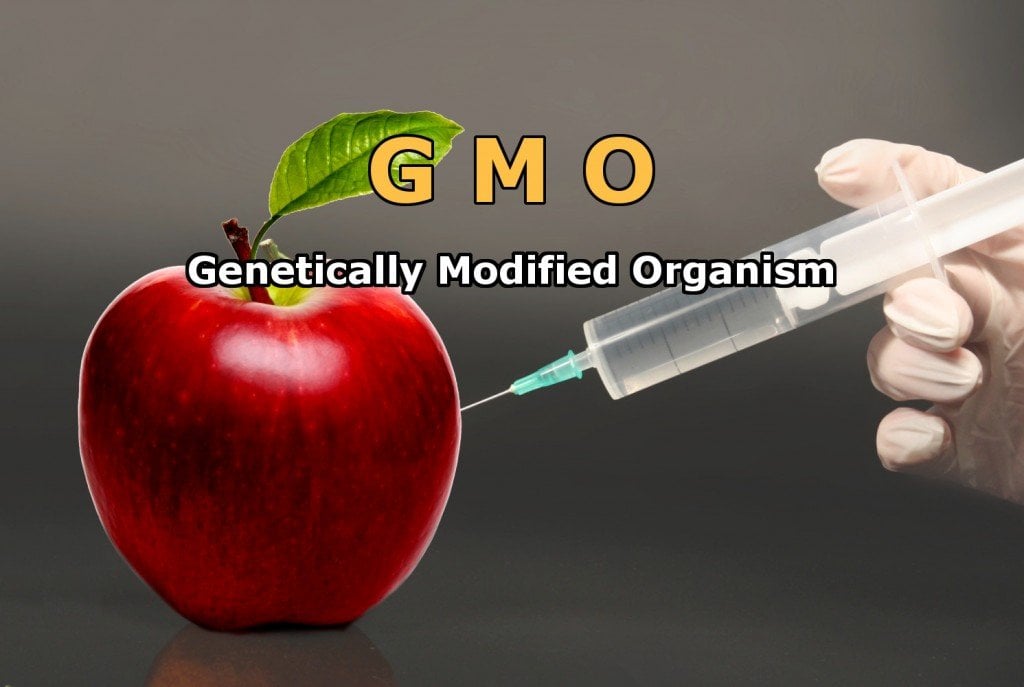 Monsanto uses agricultural biotechnology, or genetic engineering of plants, to develop new varieties of plant seeds with a range of desirable characteristics, such as being able to resist certain insects or harsh weather conditions.

Genetically modified crops – also known as genetically modified organisms (GMOs), GE crops or biotech crops – include one or more genes from another organism, such as a bacterium or other microbe or other plant species. For plants, the inserted gene results in a beneficial characteristic in the plant, such as the ability to tolerate environmental pressures from damaging insects or drought. GMO is commonly used to refer to GM plants, as well as the food or ingredients from GM plants.

As a seed company, Monsanto studies, breeds, grows and sells GM seeds – as well as conventional seeds – to farmers around the world. Our research teams use traditional and advanced breeding techniques to develop new varieties; they use biotechnology to give those varieties an additional desirable characteristic (or beneficial trait) that often cannot be effectively developed through breeding practices alone.

The GM traits we develop typically help farmers increase yields on their farmland, while conserving resources such as soil and water. Soybeans
The GM soybean plant is resistant to pests and disease as well as being tolerant of herbicides that are most effective, allowing for less herbicide use overall.

Canola
Canola has been modified through biotechnology to make it tolerant to some herbicides. This allows for a reduced amount of chemicals needed for weed control. The modified plant also has resistance to pests and fungus.

Alfalfa
The GM version of alfalfa is tolerant of some herbicides, allowing for a reduced amount of chemicals needed for weed control.

Sugar Beets
The GM sugar beet has increased tolerance to some herbicides, allowing for a reduced amount of chemicals needed for weed control. GM sugar beets also have virus and pest resistance traits.

Papaya
The GM version of papaya makes the plant resistant to the prevalent Papaya Ringspot Virus.

Squash
GM squash has traits that improve the plant’s defense against viruses.

Arctic Apple
Developed by Okanagan Specialty Fruits of British Columbia, Canada, this new fruit was developed by turning off the enzyme in apples that cause them to brown when cut, bruised or bitten.

Innate Potato
This new potato that resists browning and has fewer unsightly wasteful bruises has been approved by the USDA for commercial planting.

Aquabounty Salmon
This new salmon is genetically engineered to reach market size more quickly than non-GE farm-raised Atlantic salmon. It is available to consumers in Canada.

“The dangers of genetically engineered (GE) foods—also known as GMOs, genetically modified organisms—are multiple. Once a gene is inserted into an organism, it can cause unanticipated side effects. Mutations and side effects can cause genetically engineered food to contain toxins and allergens and also to be reduced in nutritional value. GE foods have potential to cause damage to the ecosystem, harm to wildlife, and alterations to the natural habitat. Our plant and animal species have evolved over millions of years, and introducing genetically engineered species upsets the delicate balance of the ecology. Gene pollution can never be cleaned up.

The use of GE crops increases pesticide pollution of food and water supplies. Approximately 57% of the research done by biotechnology companies is focused on the development of plants that can tolerate larger amounts of herbicides. GE foods may cause unpredictable, permanent changes in the nature of our food. However, the genetic structures of our plants and animals have been nourishing the human race for thousands of years. Because genetic engineering is not an exact science, the new genetic structure of a plant may give rise to unusual proteins that can cause problems for humans and our health. Examples of “leaky genes” or genetically engineered plants cross-pollinating with traditional varieties and passing on the genetically engineered trait have been reported in several places. 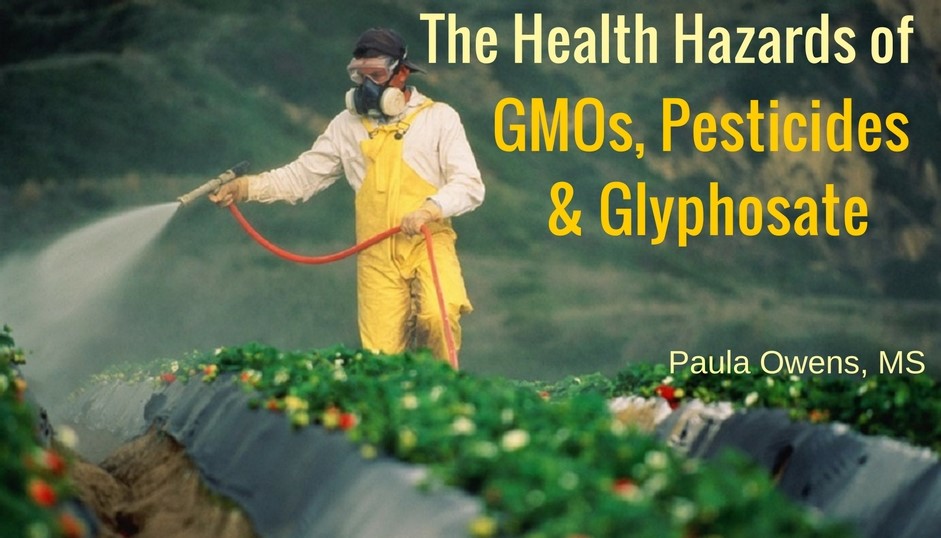 Genetic engineering companies like Monsanto try to make the claim that these genetically engineered foods are natural and equivalent to the original genetic strains. This is untrue. For example, although the industry has presented more than 1,400 examples of analyses demonstrating that Round-Up Ready soy is the “substantial” equivalent of natural soy, the manufacturer’s own studies on cows suggest that when the herbicide Round-Up is sprayed on Round-Up Ready soy, the defensive response of the plants leads to increased plant estrogen levels. This implies the obvious possibility that sprayed soybeans contain a higher level of plant estrogen than the natural beans. A significant number of people have become allergic to soy protein with stronger allergies than before, when exposed to genetically engineered soy. Keep in mind that this soy is used to feed cattle, the manure of which is used to fertilize both conventional and organic produce.

This is the food you are about to it…..does it look tempting?…. 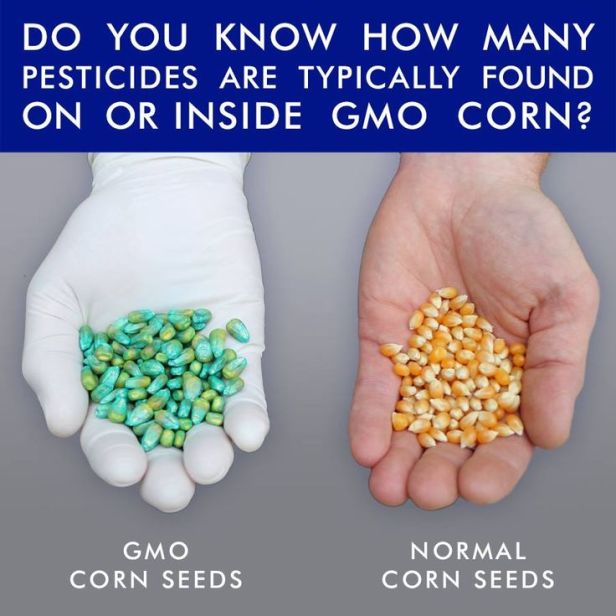 If you consume Gmo food your body becomes weaker and you develop a propension to have diseases and a weak inmune system.

Organic on the left, GMO on the right.

GM contamination will economically impact small and family farmers; that foreign export markets will be at risk due to rejection of GM-contaminated products; and that farmers will be forced to use more toxic herbicides on the crops.

Organic veganic farming specifically is emerging as a way to offset this modern malady. Organic veganic farming (sometimes called vegan organic farming) is the organic cultivation and production of food crops with no exploitation or harm to any animal in the process. Veganic farming uses no animal products or by-products, such as bloodmeal, fish products, bone meal, feces, or other animal-origin matter. Therefore, there is no exposure to GMO bacteria via fertilizer feces. Significantly, veganic farming potentiates a system closed to the negative influence of genetically modified organisms, as well as maximally avoiding any cruelty to animals.

The veganic permaculture refuses the use of domesticated animals. It is essentially the same as permaculture except for the addition of a fourth core value, Animal Care, to traditional permaculture values of Earth Care, People Care and Fair Share. Veganic permaculture recognizes the importance of free-living animals, not domesticated animals, to create a balanced ecosystem. Moreover it emphasizes that these free-living animals should sustain themselves on their natural food in accord with their God-given instincts, rather than being penned and force-fed a diet of genetically engineered, unnatural substances proven to cause cancer in laboratory tests. The sale of animal agriculture by-products supports animal agriculture and animal exploitation.

From a spiritual perspective, the karma associated with the animal agriculture and traditional farming sustained by animal exploitation does not support the awakening of the higher expressions of human consciousness on the planet. The way we eat determines the way we live, and the way we eat is determined by the way we farm. Food production represents our relationship with the earth. If this relationship is contingent upon exploitation and cruelty, how does this affect the content of our minds and lives? In this light, the infractions suffered upon basic human rights throughout history make sound spiritual sense.

Vegan-Friendly Stories for all ages